Calculating with natural numbers goes well if you add the numbers. But subtracting natural numbers causes problems. For example, what is the result of \(1-2\) or \(2-3\)? This leads to the introduction of the set of integers, denoted by \(\mathbb{ℤ}\)

The integers can be drawn on a number line: start with a first point on a straight line and give it the label 0 and choose a second point that gets the label 1. We agree on the distance between these two points being equal to 1. Now make strides with size 1 along the number line and always label the next position with the next integer. Do the same in the other direction and you get the following number line:

Rational numbers In \(\mathbb{ℤ}\) we can add, subtract, and multiply without problems. But the division of two integers not always produces an integer value. This leads to the introduction of the set of rational numbers, denoted by \(\mathbb{Q}\)

Also, the rational numbers, i.e., the numbers that can be written as a fraction, can be placed on the number line. In the drawing below, you can see the construction of some of these points. 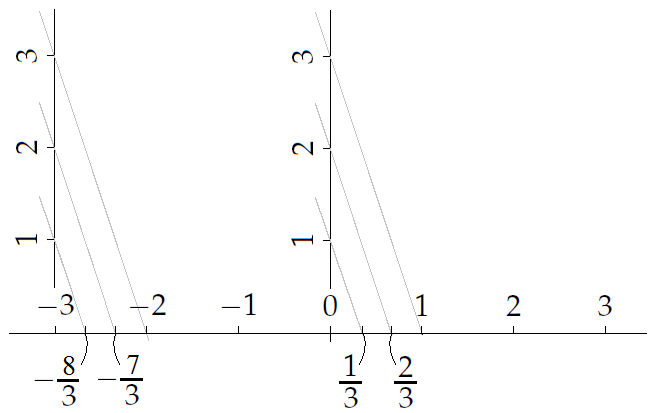 In a fraction there are two integers, the numerator and the denominator, separated by a horizontal or slanted line. In the above picture, a rational number is drawn on the number line that as fraction \(\tfrac{2}{3}\) has numerator \(2\) and denominator \(3\). But we could also have linked the point with label 6 on the vertical line passing through 0 with the point on the horizontal number line with label 1 and have drawn parallel lines. Then we would have given the point with the previous label \(\tfrac{2}{3}\) instead the label \(\tfrac{4}{6}\).

Rewriting fractions When you multiple or divide the numerator and denominator of a fraction with the same (nonzero) integer, then the value of the fraction does not change.

Area models of fractions The number line is actually a length model of fraction. But there exist other models of fractions. In textbooks about calculation with fractions you will often first see fractions being represented as planar figures that are divided into pieces of equal size. Circles and rectangles are very popular. Below, the divisions of a circle into sectors (wedges of cake or pizza depending on your taste) and of a rectangle (or a strip) into smaller rectangles with equal area both represent the fraction \(\tfrac{2}{5}\).

In the interactive version below you can look at visualisations of other fractions. You can check visually, for example, that the fraction \(\tfrac{3}{6}\) and \(\tfrac{1}{2}\) both yield a half-shaded circle; one representation is more fine-graded than the other one.

Division by 0 Because one cannot divide by zero, the denominator of a fraction cannot be zero. The set of rational numbers exists of all numbers of the form \(\tfrac{p}{q}\) with the numerator \(p\) being an integer and the denominator \(q\) being a nonzero integer.

Here we first claculated the least common multiple (lcm) of the two denominators \((\)in this case, \(\mathrm{lcm}(9,12)=36)\) and then adjusted the numerators and denominators accordingly.
New example